Risk assets continued their climb higher during the quarter.  There were hopes of another round of stimulus, but Congress has been unable to agree on a path.  Many Americans have been able to get back to work as the unemployment rate has fallen from its peak.  The September unemployment rate stood at 7.9%, leaving 11.6 million people out of jobs due to the COVID crisis.

US Stocks, measured by the S&P 500 Index, were up 8.9% for the quarter, bringing the index into positive territory for the year.  As we wrote about last quarter in “Growth Leads,” the largest companies in the index continue to drive the index higher.  Through September, the largest 5 companies are up 35% for the year, while the bottom 495 stocks are down 3%.

Price-to-earnings (P/E) ratios are elevated compared to historical averages due to the depth of the economic recession and the expectation that corporate earnings will recover in the second have of 2021.  On a normalized earnings basis, stocks are still expensive, albeit to a much lesser extent.

Below is a table highlighting various market index returns over the past 3, 12, and 36 months: 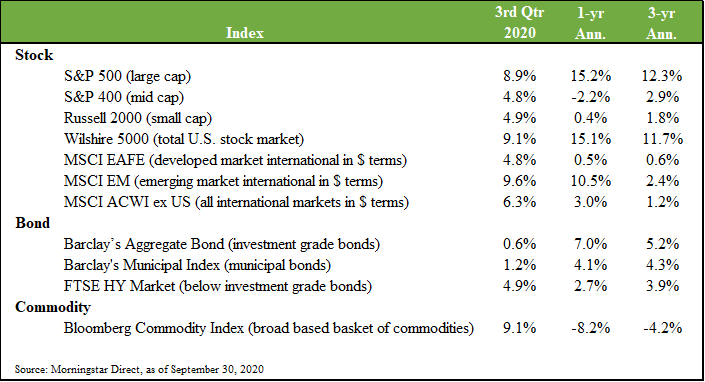 Over the past few weeks, the majority of questions coming in have been about the upcoming presidential election.  Here are some of our thoughts on various scenarios.

First, it is important to say that politics should not drive how you invest.  During the 2008 election, many Republicans feared that the market would see large declines under the Obama administration and during the 2016 election, Democrats thought the market would fall under Trump.  Investors missed out on large gains in both situations.

As you can see above, stocks have continued to rise under both political parties.  The market has typically trended up and has set new highs under almost all political control scenarios.  It is likely that the markets will see increased volatility around the elections, especially this year as there are so many unknowns.  One thing that the market does not like is uncertainty and this year there is plenty of that, but that doesn’t mean the market will decline.

It is becoming more likely that we will not have results on election night.  This is especially true due to the number of absentee and mail-in ballots to process and count this year.  To add to the delay, ballots in Wisconsin and Pennsylvania (other states changed their rules for this year) cannot begin to process the ballots prior to election day.  Ballot processing includes: matching ballots to the polling place they were delivered; ensuring the voter had not voted yet; matching voter signatures; and checking for random marking or wrong color pens.

Once we have a clear winner, markets are likely to settle down, because markets trade on fundamentals, not politics.  Once companies have a clear understanding of the landscape, employees and management will go to work to maximize value for shareholders.  Below you can see how markets and the economy have fared under Republican control, Democrat control, and a divided government. 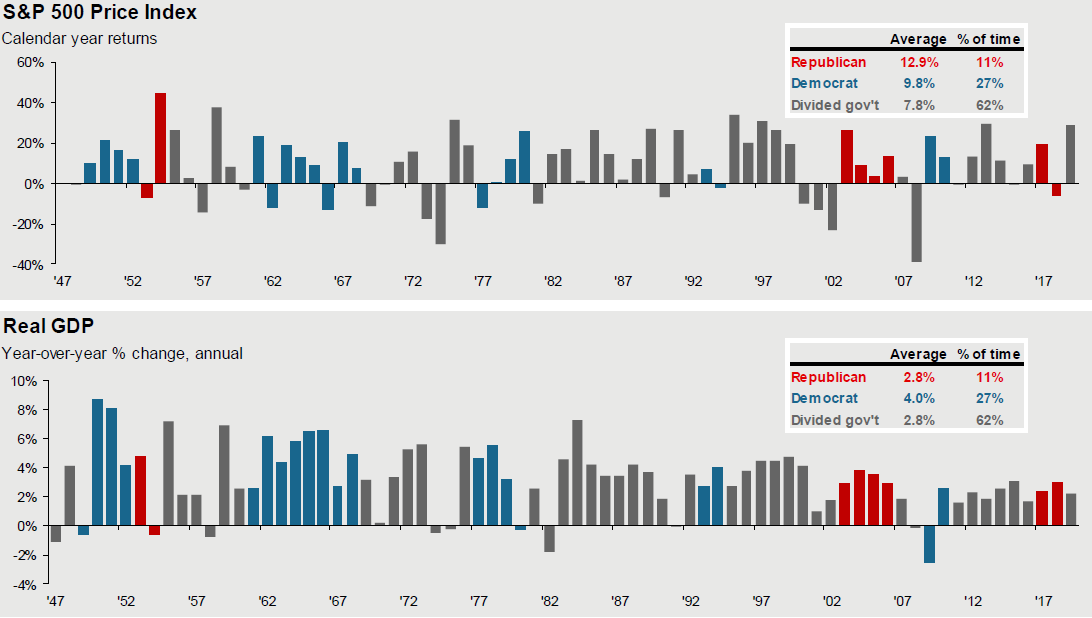 GDP (above, bottom) has also done well under all versions of political control.  Republican control, Democrat control, and divided control have produced an average GDP growth of 2.8%, 4.0%, and 2.8%, respectively.

Emotions are difficult to control.  Although we know that we should not let emotions control our investment decisions, they often creep in.  Instead, focus on your long-term asset allocation targets and make sure your portfolio is in-line.  If you are overweight stocks, sell some to get back to your target.  It could help ease your election concerns and provide an opportunity to buy more stocks should the market decline.

As you can see in the GDP chart above, GDP has been rather consistent since 2010.  Below, you can see that depending on which political party has held the Presidency, the rating of the economy has ebbed and flowed heavily along partisan lines.  Don’t let politics drive investment decisions! 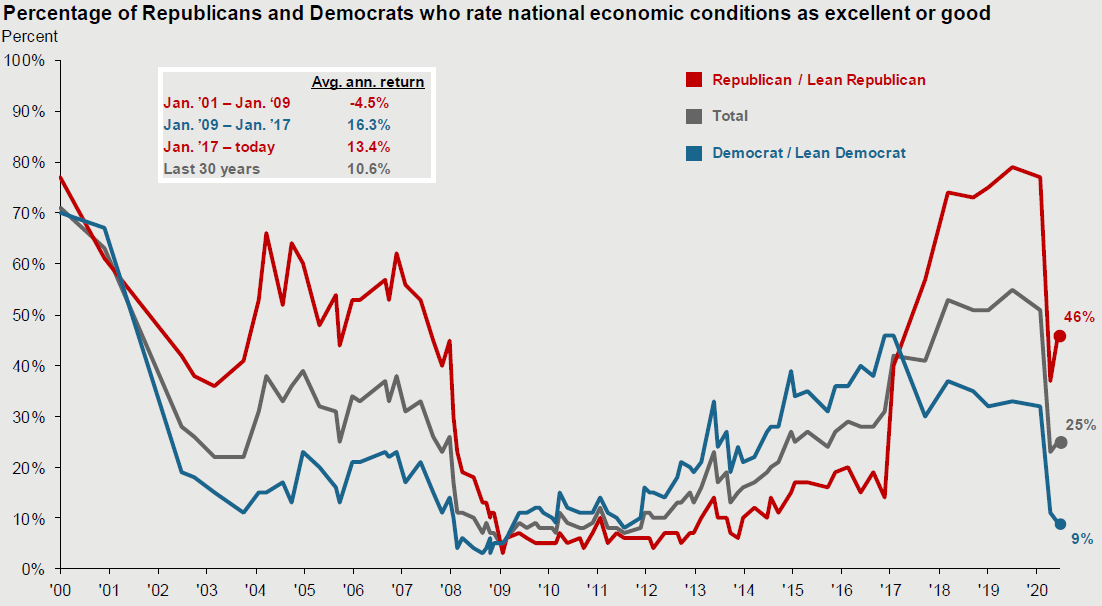 Enjoy the fall weather moving in!